Paudraic is a slave merchant/smuggler from the planet Orion in the Kirk era Star Trek universe. In the Angel Falls universe, he is the alien owner of Paudraic's Getaway, a hotel, brothel, casino, conventioncenter resort. Paudraic is a non-aligned character being niether totally villainous nor totally virtuous. Among the Angel Falls notables who have visited Paudraic's Getaway are: Ultrawoman, Connie Crimson Conservative, Mayor Quimby, Commander M'Chel, Dark Star, Jessica Nicole, and more...

Paudraic is around six feet and 250 lbs. He appears to be in his 50's, has thinning, gray hair, and wears glasses. The glasses are mostly a 'heads-up display' of data for him. Paudraic's human appearance is due to an ancestor's visit to Earth in the past.

He is sarcastic, irreverent, selfish, lazy, petty, and moody. He is more interested in having sex and fun than being cruel but can become ruthless when he feels threatened.

Paudraic's only 'super power' seems to be the ability to inspire loyalty and devotion from his women even though they are slaves. He takes this unusual effect for granted and doesn't seem aware of it to the point of his complete astonishment when he hears of slave rebellions or escape attempts from other Orion slave traders.

I haven't yet established the means of Paudraic's presence on Earth. Time travel, inter-dimentional travel, actually not Paudraic but an ancestor of Kirk's Paudraic. Who knows. ﻿﻿﻿﻿﻿﻿﻿﻿﻿﻿﻿﻿﻿﻿﻿﻿

The grand opening of Paudraic's Getaway Resort was protested by the people of Angel Falls for various reasons.dA:Mixed messages Paudraic made generous payments to local politicians and authorities and sure enough those folks found loopholes and go-around for things like sex slavery, prostitution, gambling,etc. dA:Paudraic Finds a Friend

Paudraic's participation in the 'Succubus' invasion consisted mostly of defending the complex from a horde of demonic creatures. He was not present at the time. His women fought bravely and destroyed many of the monsters. But they were greatly outnumbered and were overcome. dA: Invasion: The Masion Battle Many of the women were killed or carried off to fates worse than death. Paudraic resents the fact that neither the police nor the Supers of Angel Falls came to the aid of his women during the invasion. Paudraic 'purchased' many women from local jails in Angel Falls to quickly restaff the resort after the extensive rebuild required after the invasion. dA: Paudraic Recruits

Some of Paudraic's women participated in the Bikini Charity Auction. dA: Paudraic: Donation to Charity

All are first and foremost my sexslaves. Most are multitalented, their activities in the story are listed here. Technically, all are available for sale or rent but somehow avoid it--for now. Aboard Sybarus Paudraic's women rarely wear clothing. In the resort Paudraic's Getaway they wear sexy revealing clothes suitable to their tasks or if outdoors or in common areas what the law and common courtesy require. Paudraic’s presence in Angel Falls comes after the Orion Factor story so the characters listed as killed or dead may only be referenced

There are more than 150 women aboard Sybarus Paudraic's Getaway employees over a thousand, about a third are off worlders.

Killed protecting Com. Uhura from an attack by Visha the Cardassian

Paudraic is an original character invented by Patrick Neel based on an alien race found in the Star Trek universe. None of the images or stories I create are meant for anything other than fan enjoyment. No money or claim of originality is made.

I made a Star Trek movie poster for a Yahoo Star Trek club. Then decided to write a story that went along with the poster. The story is still unfinished. Then I did a book cover.

The following information may contain spoilers for events in the story, The Orion Factor

Paudraic is an Orion entrepreneur, that is to say a slave trader and a pimp. He is a crossover character from the Star Trek universe, the Kirk era. His presence in Angel Falls consists primarily of Paudraic's Getaway Resort. The luxury hotel/casino/bordello/convention center complex located on the Eastern shore of the Southern penninsula of Angel Falls.

All the employees, ALL OF THEM, are females. They are a wild mix of interstellar species, most from the Star Trek universe and other established aliens from other sci fi sources. But some unnamed species created by me. And some will be new species created by others on Deviant Art. 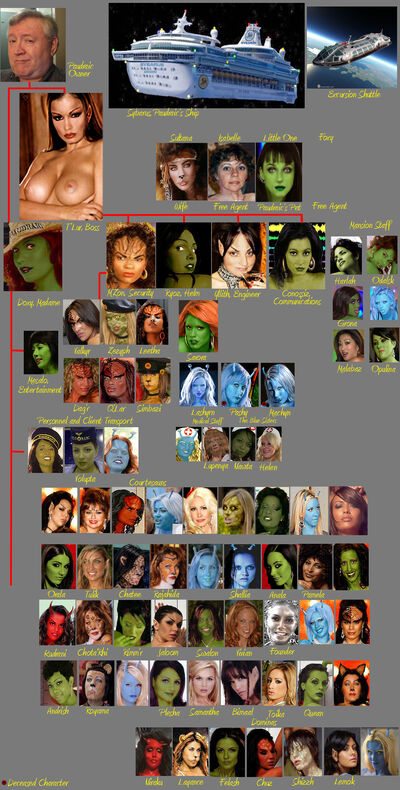 Retrieved from "https://angel-falls.fandom.com/wiki/Paudraic_of_Orion?oldid=5460"
Community content is available under CC-BY-SA unless otherwise noted.